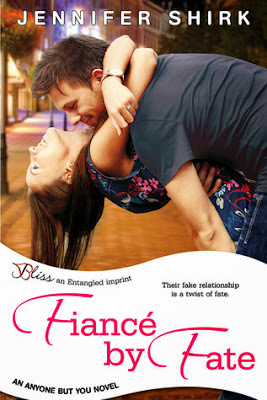 Their fake relationship is a twist of fate.
Sabrina Cassidy believes in fate. So when her fiancé breaks off their engagement, she’s convinced they’ll get back together eventually. But fate was not on her side when it brought Jack Brenner into her life—and work. Frustrating, gorgeous, and cocky, Jack has an offer that Sabrina can't refuse. Not if it means getting the life she’s always imagined.
Despite being one of the town’s most eligible bachelors, Jack has a reputation that’s working against him. He has to convince his father—and his company’s board—that he’s ready to settle down if he wants a promotion. But convincing Sabrina to be his fake girlfriend turns out to be the easiest part. What he didn’t count on was their intense attraction and how easily their lie would escalate. Sabrina’s still hung up on her ex, and Jack will never settle down. But fate has other ideas…


REVIEW
Merriam-Webster defines “Bliss” as complete happiness.  Reading Fiancé by Fate will definitely put you in a state of bliss.  Jennifer Shirk has written a truly sweet romance that will leave you smiling.
Jack Brenner has just been transferred back to the Boston office of Brenner Capital Investments.  His thought is that this move is the gateway to the National Sales Manager position, which will eventually put him on track to run the company founded by his father.  Unfortunately, Jack’s playboy lifestyle is about to get in the way.
Sabrina Cassidy is “little miss perfect”.  Sabrina is almost 30-years-old and desperately wants to have a family and be stable; something she never experienced while being bounced around in foster homes.  She’s a little delusional in her thoughts that she and her former fiancé David will get back together.  Sabrina has even gone as far as to consult a psychic in her attempt to make sure her and David are destined to be together.
Jack’s transfer to the Boston office now means that Sabrina, who is an internal wholesaler at Brenner Capital will now be working with him.  Jack is everything Sabrina dislikes.  She thinks he takes his family for granted, is a playboy, and never takes anything seriously.  More importantly, she thinks he’s only gotten jobs within the company because his father owns it.
When Jack finds out that he isn’t going to get the position because of his personal life, he comes up with the idea of having Sabrina pretend to be his girlfriend.  After all, having someone who is as wholesome and straight as an arrow like Sabrina is bound to make him look like a stable guy.  In return for Sabrina helping him, Jack agrees to help Sabrina get David back.  After all, if David really has cold feet as Sabrina thinks, then making him jealous will have him running back to her.
I will admit that Sabrina can be a little irritating with her psychic/astrologistic belief that she’s going to get back together with David.  But this is something that has to be overlooked  based on the way she grew up.
I loved that this was a truly sweet romance.  One of Sabrina’s rules for her and Jack’s arrangement was no kissing.  Yeah well, that rule got thrown out the window fast.  But that’s as far as it goes.  Fiancé by Fate takes you on a journey where two people initially have thoughts and beliefs about each other, only to have those misguided thoughts disappear once they start to get to know each other.  Once you get into the book, you aren’t going to want to put it down.  After all, “You are still the creator of your own destiny. Don't overlook the journey.”
Rating: 5
Release Date: April 14, 2014
Book Length: 242 pages
Source: Publisher
Reviewed by: Kim
Reading Format: Available only in eBook


Purchase from Amazon or your favorite eRetailer

You can read an excerpt of Fiancé by Fate here.