Review ~ HIDING IN THE SPOTLIGHT by Karen Booth 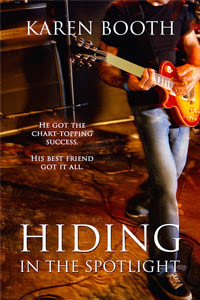 David Callahan wanted a career in rock music and a life with Alex, the woman of his dreams. He got the chart-topping success. His best friend got it all.


Alex Halford’s rock-star husband, Glenn, steals away in the middle of the night, leaving her with their two boys, a mountain of debt, and one person to turn to—his lifelong friend and band mate, David Callahan. David helps Alex pick up the pieces of her shattered life, happy to have any time with the woman he’s loved for seventeen years. Every moment with her is ripe with opportunity, and every last idea running through his mind would destroy his brotherly bond with Glenn.

Out from under Glenn’s thumb, Alex can see the person she was before marriage, finding feelings for David she thought she’d left behind in high school. A single kiss and the floodgates open, giving her new hopes of happiness. But when David and Glenn’s band has a chance to be back on top, David must convince Glenn to return. With every passing day, success comes closer, Glenn’s ego inflates, and David and Alex find it more difficult to hide. One misstep and the secret comes out, forcing David to choose between his life’s work and the woman he doesn’t want to leave behind.

I'm going to start this review by giving Hiding in the Spotlight a rating of 3 stars out of 5.

There were so many good parts to this book but there were a lot more ho-hum parts.  I wanted to get inside the book and strangle some of the characters for their bad decisions.  The author's dialogue between characters was lacking in substance but the good parts of the story slightly made up for it.

Glenn is an egotistical, typical cheating rock star who doesn't know what a good wife he has for putting up with him all the years they've been married.  Alex realizes her marriage to Glenn is finally over when he leaves her with no notice and forces her to have to live with his bandmate and long time friend, David.

David's been secretly in love with Alex since she was the new girl in their high school but Glenn ultimately won her heart.  You learn that Alex secretly had a crush on David way back when but because he wasn't quick enough to ask her out before Glenn…they've both had their own form of suffering over the years.

David and Alex fall in love during Glenn's absence but it's not all happiness and roses.

I had a hard time reading about the way Alex treated her two boys, Page and Tyler.  You learn their ages, 13 and 10 but I seriously thought they were much younger based on how she spoke to them and how the boys spoke too.  This part of the book isn't significant to the story, just my own personal opinion.

Hiding in the Spotlight is a decent read, just not an exciting one.  I was not upset when it finally ended.

Purchase your copy of Hiding in the Spotlight from: Amazon | Barnes & Noble | Kobo | All Romance