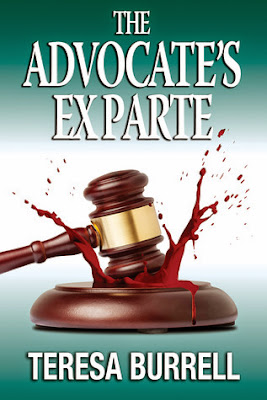 Attorney Sabre Brown is summoned into Judge Lawrence Mitchell chambers for an ex parte hearing. When the judge attempts to discuss one of her cases, she refuses to listen without proper counsel present.


Sabre’s shock at his death is only surpassed by an attempt on the life of Dr. Carolina Heller, a psychologist she employs on a regular basis. Sabre now fears for her own life.

Sabre enlists her private eye JP, and they begin to comb and scrutinize her cases, searching for connections between the two crimes. But Sabre’s life is in danger from someone much closer to her.

Sabre and JP’s roads diverge. While JP infiltrates a twisted world of greed and corruption, Sabre is caught up in a domestic crisis fueled by obsession. As each is forced to fight their own battles, the question soon becomes, can they find a way to save one another?

The Advocate’s Ex Parte starts out with Judge Lawrence Mitchell asking Sabre Brown into his office alone, to discuss one of their cases.  Sabre fears having anything discussed about a case without another attorney being present.  When Sabre calls in another attorney, the Judge gets furious and kicks them both out of his office.  Later that evening, the Judge is killed in a hit and run, leaving Sabre to wonder what the judge wanted to talk about.

Sabre brings in her private investigator, JP Torn, to help her go through her active cases that involved the judge.  The result is multiple cases with persons who would all benefit from the judge’s death.  What appears to be a random act turns out to be more when a psychologist Sabre uses often for her cases is also hit and left for dead.  Sabre’s life is threatened when bullets start to fly.  But this is just the beginning of what happens to Sabre.

Teresa Burrell continues to draw on real life events, which unfortunately can be found in the juvenile court system.  The Advocate’s Ex Parte involves arson, domestic violence, greed, and murder.  With so much going on, trying to figure out where the ultimate crime lies is a little hard.  Especially with all the dead ends Sabre and JP keep running into.

I’ve read every book in the series and found this one to be lacking the “oh my God” shocking moment.  That’s not to say that there aren't twists, turns, and surprising moments because there are.

While The Advocate’s Ex Parte continues to be in your face with issues society prefers to not talk about or acknowledge exists, it also shows that friendship and love are very powerful things.  Teresa Burrell is one of those authors who has the ability to draw the reader into the story and keep them glued to the book.
Rating: 4

The The Advocate Series: